A colorful cafe I visited in Puerto, Jimenez

After spending a month working on a family farm in the heart of Costa, I caught my bus out of San Isidro with a new phone, street cred, and a whole new respect for chickens. On my 9 hour journey south, I reflected on my adventures thus far.

I came to Costa Rica with high hopes and expectations for myself. Learn Spanish with no prior knowledge of the language? Psh, bring it! Learn the world of irrigation? Easy! Tap into my inner compass and find my way through foreign cities, bus stops, and use my wit to decode schedules and learn the currency? What a breeze!

The reality of my first month was not a walk in the park, nor a walk along a serene beach with a parade of tropical monkeys behind me singing and dancing to “Circle of Life” from The Lion King. Instead, my resilience was tested.

I'm Bre. And after living in Seattle, Washington for four years, I was ready for a change.

I had a comfortable life with an enjoyable job at a wine bar downtown. My home was a “girl den” in the nearby “city-hippy” neighborhoods with my best friend Stef. I passed the days watching my plants grow from sprouts to leafy friends, crafting on weekends, riding bikes through Ravenna Park and drinking beers at Cloudburst Brewery with my friends after work.

All the small comforts, the routine. My life in Seattle was beginning to feel like it was on a loop, weeks were passing without any change to separate one day from the next. Staleness in the air created a lack of inspiration to create. Inspiration fizzled into laziness in the form of Netflix binging. This was a scary place to find myself, knowing all the passion and desire I had burning inside.

Settling was not in my cards. No way.

After a long conversation over a bottle of merlot, Stef and I decided to take a leap, end our lease and follow our dreams. She followed her heart to Whistler, Canada to grow as an artist - and I bought a one way ticket to San Jose, Costa Rica.

This is when my journey began.

And what was that not so easy beginning?

A week in, I was in town having a few celebratory beers for completing my first week of work and using the bar's wifi to catch up with family and friends and - long story short - it was dark when I was leaving and I asked a young man for directions to the bus stop, instead he lead me in circles.

I caught on and took out my phone to call a cab and he grabbed it from my hands and ran.

Instantly, I cried. I couldn’t stop it. I was so upset with myself for trusting someone blindly, for putting myself in a vulnerable situation.

I should have known better, where were my city girl smarts I so prided myself on?

After a long night of speaking with the cops, they kindly dropped my sobby self off at a hotel in town where I got a room for the night. Feeling defeated, a friend from home talked me into a calmer place and when I woke up the next morning I shook all the anger from my spirit. Yes, I messed up, but there was no good in beating myself up for it.

I told myself, “I am strong, I will not be brought down by one lapse in judgment and I will not let a shitty encounter corrupt my thoughts of this town or my trip”.

So I danced. Around my room to “Fireball” blasting from outside my window (thank you Zumba wake up call!) till I was back to my cheerful self.

Then karma came back around exactly a week later when I befriended a deaf man traveling through a church program at the same bar I had left that night. He just so happened to have an extra phone, and selflessly gave it to me. The world works in strange ways, I must say.

Pro tip If you ask for directions, go for someone who looks like they could be your grandparent. They most likely won’t be looking to steal your things to sell for drug money.

Back to the good

So, there I was a month later. Stronger, and ready for a change. The Osa Peninsula was calling me south for a new volunteer job near the Corcovado National Park Reserve, and before starting I saved myself a few days to stay in Puerto Jimenez.

Known most widely for it’s easy access to Corcovado National Park, it’s also known for gold mining boom in the 60’s, making Puerto Jimenez the largest town on the Osa Peninsula, with a population of a whole 9,000.

If you enjoy calm shallow beaches, friendly locals, and are hip with close encounters with exotic animals, you will enjoy it here as much as I did.

A walk to the BM supermarket down the road will introduce you to full sized iguanas perched on tree trunks and capuchin monkeys watching curiously from the towering trees.

My first night, I stayed at the small one room dorm style Corcovado Wild Hostel. Being low season I was the only one staying there, and became fast friends with the owner over beers.

By luck, I was visiting during the Festival de San Juan. With no specific annual date, the week long festival takes place when the mini summer begins, usually at the end of June.

Lured by the hollers of on lookers and an amplified voice across town, we hopped on his motorbike and rode to the festival. In the open field there was the bull riding ring to the right, a stage to the left, and stands lining each side with meat skewers, churros, and festival games.

As a rider and his bull were released from the pin, drunk men in cowboy boots danced around in the ring, howling to their clapping fans as others ran on to join in a game of tag with the bull.

Everyone was laughing, drinking, patting each other on the back as they passed their neighbors. The gregarious energy in the air lead me to the music playing from the stage. I joined in on dancing the Cumbia (Costa Rican swing) with a man in his 50’s, who was patient enough to help me move through feeling and not thinking.

Surprisingly I ended the night the most sober (may not be saying much) of the bunch, drinking beer at the “illegally open” bar in town until the cops came to shut it down. Rolling with the locals for a night was a hoot. The tico’s/tica’s down south sure know how to have a good time.

Pro tip If you stay at Corcovado Wild Hostel, ask to join Christian to feed the crocodile in the morning.

After a long night of partying, I knew the beach would be the only cure to my hangover.

As I wandered around town and followed the signs to the playa, I arrived at a quiet spot surrounded by greenery. I spent a few hours floating around in the calm clear waters until I was good and crisp, lulled by the sight of macaws overhead.

Only a few other people and couple of wandering town-dogs shared the beach with me. One golden pup even delighted me with a swim!

There were no vendors on the beach or lawn chairs for rent. It is truly a beach for locals to enjoy (and you if you know where to find it).

At night I returned to the beach with an orange juice vodka concoction and set up my hammock between two palms. Smoking a splif, I pondered life through the lights of the stars above.

Pro tip If arranging a day or two trek in Corcovado National Park and haven't scheduled one ahead of time, ask your hostel or hotel owner. Most people in town know someone who is a guide and you are more likely to get a better deal by booking with someone you’ve met through the grape vine.

So after a fulfilling few days of wading in the gulf and exploring the copious overgrown dirt streets, I was ready to head off deeper into the forest where my next adventure lay. I said goodbye to the friendly faces I had met, walked to the hardware store where I waited with a pineapple flavored frozen juice pop to catch the collectivo to Dos Brazos. 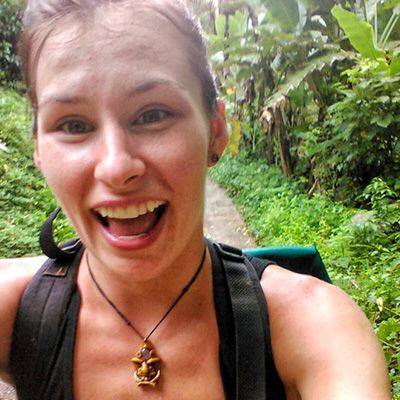